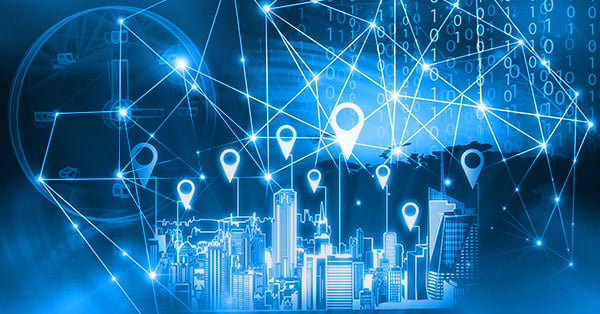 To understand how this feature works, let’s look at an example. Say you have a device with a LoRa chip, and gateways that feature the SX1303 processor. The device sends a data packet. When each gateway in range receives the packet, it stores the precise time of arrival in nanosecond resolution. The gateway closest to the device receives the packet first; and the ones farther away receive the packet later. When the packet is received by at least three gateways, the device can be located based on the packet’s time difference of arrival (TDOA) at each gateway.

You can also look at it this: when you throw a stone into a lake it creates a ripple effect. In this lake, presume that we have set up gateways at different locations in the lake. When the stone hits the water, the water breaks into ripples that spread out at the same rate in all directions. Because the gateways are at different distances from the stone, the ripples hit each gateway at different times. Based on those time differences, we can estimate the position of the stone.

In much the same way, a LoRa device (the stone) sends a data packet (the ripple) which is then timestamped at each gateway in order to locate the device. After the data packet is received by the gateways, each timestamp is sent to the cloud, where the timestamps from all of the receiving gateways are used to calculate the location of the device. (The location accuracy is between 75–150 meters, depending on radio channel conditions, line of sight or multi-path, and the number of receiving gateways.

There are practical advantages when it comes to implementing a gateway with SX1303. For example, if you already have sensors with LoRa chips monitoring the temperature in your delivery trucks and you also need to track the location of the trucks, setting up gateways that use SX1303 processors allows you to track the trucks as well as monitor their temperatures, all using a single LoRa device. As a truck travels, the LoRa device sends packets to gateways that are in range. With the Fine Timestamp feature, every time a gateway receives a packet from the device, it will attach a timestamp (in nanoseconds) and send the data to the network and application servers. The servers then send the timestamp data to the Cloud, where a TDOA location solver calculates the location of the device based on the different timestamps received from the various gateways.