Images courtesy of The Things Industries

After almost two years, the world record for distance traveled by a data packet based on the LoRaWAN® protocol – 702 kilometers (436 miles) – has been broken. Set in 2017, this record was regarded by many as nearly impossible to break; that is, until the recent Servet IV mission. On July 13, 2019, the previous record was exceeded by 64 kilometers for an astonishing distance of 766 kilometers (476 miles).

On Saturday, July 13, 2019, seven balloons of different sizes launched from Alfamen in Zaragoza, Spain. The balloons carried 20 experiments from developers, ranging from young talents to veteran makers. The balloons were tracked using The Things Network, LoRaWAN-based networking infrastructure by APRS and by satellite using Spot.

A probe named Diana I, made by Enrique Torres from the computer architecture research group of the University of Zaragoza, was aimed at reaching the highest possible altitude (>40 000m). To do this, the balloon’s lift and capsule weight were optimized to the gram. The climb would take more than 10 hours and the route was likely to be very long, creating a high risk of losing the probe completely. The device featured a TTGO node containing a module based on Semtech’s LoRa® chipset, offering advantages in price (only €17), availability, weight, and low power consumption. Thanks to its ease of use, broad integration possibilities and countless number of connected gateways, The Things Network was selected as the networking platform. 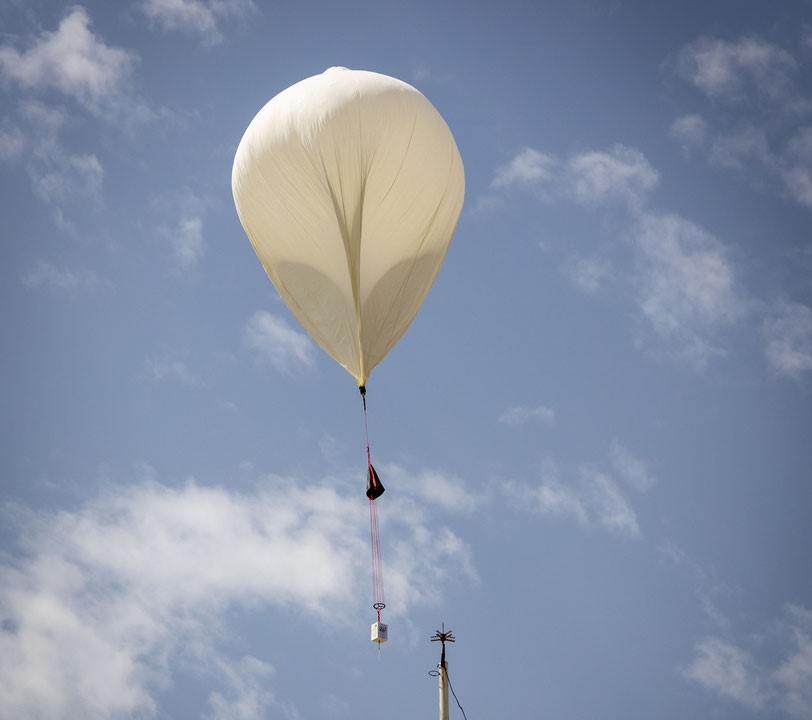 Launch of Diana I

The probe, weighing 106 grams, was equipped with a BME280 (a low power module used to measure temperature, humidity and barometric pressure) and GPS. It transmitted data packets approximately every 60,000 ms, cycling between SF7, SF9 and SF11, and using a transmission power of 14dBm (25mW). Because of the shaky nature of the balloon and the time needed to transmit signals, SF12 was not used.

At a temperature of -16.5 degrees Celsius and flying only 24,859 meters above Ariza (Zaragoza, Spain), 24 gateways received Diana’s messages. One of them was located at a ski resort on a mountain 2,253 meters high at an incredible distance of 766 kilometers from the probe. 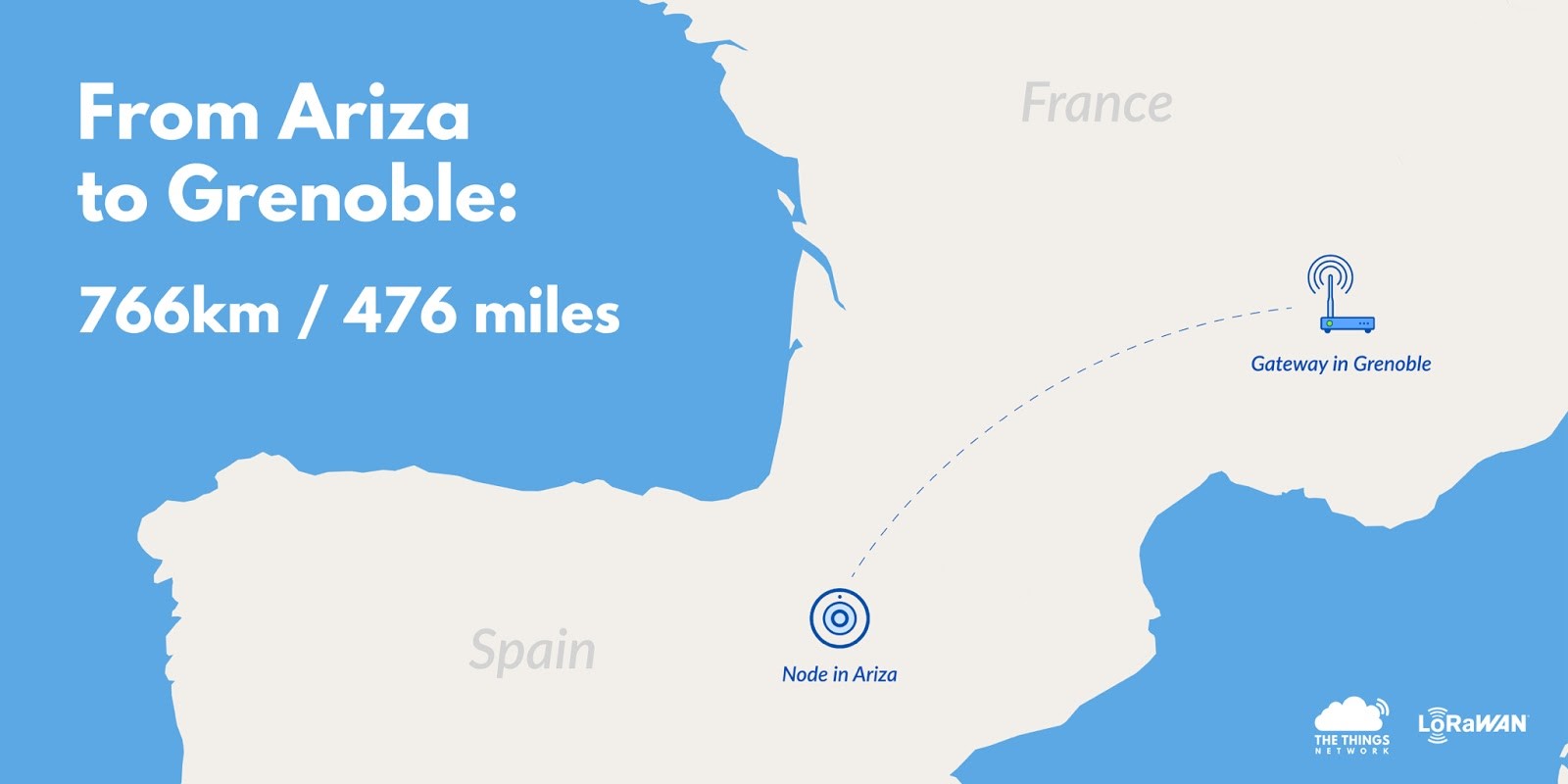 Distance between Diana I and the receiving gateway

Levent Gurgen is in charge of the project that deployed the Kerlink gateways to the mountain, and the deployment of the gateways was executed in the context of the Wise-IoT European project for smart ski station experimentation.

Thanks to The Things Network community, the owners of the Kerlink gateway were contacted, and Jander Nascimento from CEA declared: “That is for sure a great achievement and something great for the success story of the LoRaWAN protocol.” More details about the project can be found here (Chapter 2.5). 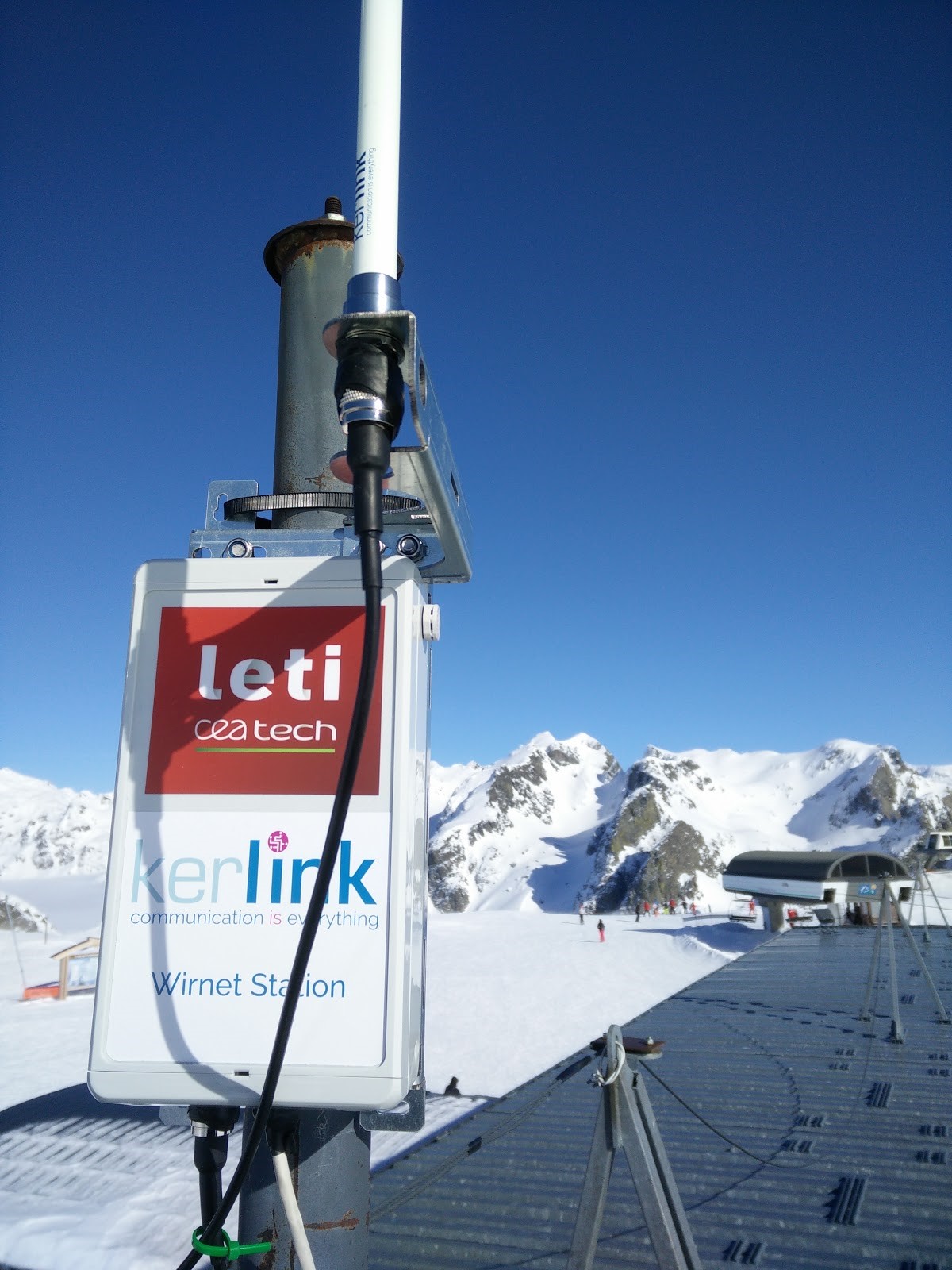 The new world record approaches the theoretical maximum distance a LoRaWAN-based packet can travel. Semtech’s LoRaWAN Academy™ argues that 800 kilometers is the maximum distance possible in Europe using 25mW transmission power in the 868Mhz ISM band. LoRaWAN Academy members can learn more about this in the radio propagation module, starting at minute 15:00.

Find this record-setting distance hard to believe? Visit the official article on The Things Network’s site for more information and links to the raw data.

About The Things Network

The Things Network provides a global, open LoRaWAN network with a set of open tools to build your next Internet of Things (IoT) application at low cost, featuring maximum security and ready to scale. The Things Network has built a collaborative IoT network, using robust end-to-end encryption, spanning across 100+ countries around the globe. It operates thousands of gateways, providing LoRaWAN coverage to millions of people.