Getting to Know LoRa Basics™ Station

In the How to Use LoRa Basics™ Station technical paper from Semtech, Anton Beitler provides in introduction to LoRa Basics Station including:

The paper begins with an overview of the purpose of a gateway in a LoRaWAN® network, namely, that a gateway is the interface for the LoRaWAN Network Server. It listens to certain parts of the radio spectrum, decodes valid LoRaWAN packets out of LoRa®-modulated signals originating from LoRa-based sensors and forwards them to the network server. He goes on to explain that a gateway can also transmit LoRaWAN packets from the network server down to the LoRa-based sensors as LoRa-modulated signals.

LoRa Basics Station handles all tasks related to basic packet forwarding functionality for LoRa-based Class A, B and C end nodes on a LoRaWAN network. In addition, Station has several features that make it particularly advantageous for large-scale gateway deployments for which centralized configuration management and remote inspection capabilities are key. Station’s architecture makes it easy to port to different platforms, even to embedded systems.

Station has been specifically designed with the following aims: 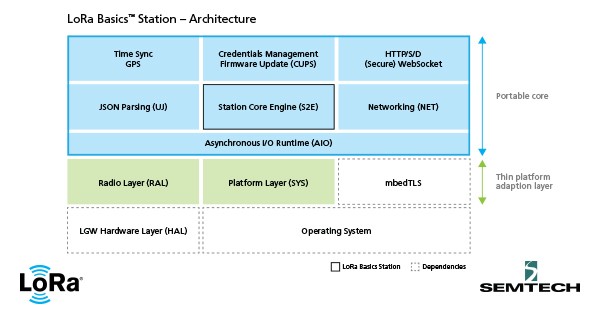 As you can see from the block diagram, the RAL, SYS and mbedTLS modules comprise a hardware-specific adaptation layer which provides a unified interface for the system components towards the portable core implementation. At compile-time, the choice for the RAL and SYS layers is made and the resulting object is linked statically with the mbedTLS library.

Not only is LoRa Basics Station both easily portable and easily testable thanks to its resource-efficient lean architecture, it also sports a host of additional features that make it the clear choice when selecting a gateway implementation for a LoRaWAN network. Among these features are: